Summit Series 50 Years Ago, Game One in Sweden 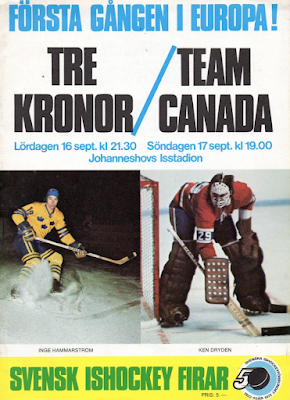 "I wasn't impressed with the Canadian team. We had too much respect for them, but not anymore." These were the words of Swedish coach Kjell Svensson after his squad was beaten by the Canadians by a score of 4-1. His assistant coach, Bjorn Norell added, "It was a bad game, it was really our first game for the season." Harry Sinden summed it up, "When you win, everything is supposed to be okay. I sure as hell hate to think how I would feel if we had lost that one." Sinden was not pleased with how his team dealt with the European refereeing that they would quickly have to get used to. "We reacted silly. We react at home to a spear with a slash or a fight. Here, it's so obvious. You can't do that." The officials for this game would become familiar to Sinden and Canada; Franz Baader and Josef Kompalla. Sinden explained, "They have regular jobs. They only referee a handful of games a year. They can't be in shape for this. I don'
Post a Comment
Read more 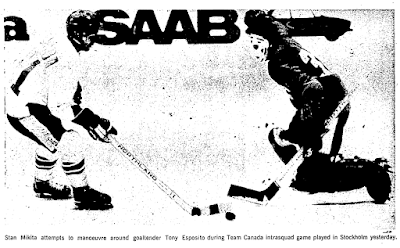 "It's all finished." These were the words of Bobby Orr after he lasted but a few minutes on the ice in practice. He would end up behind the White bench for the 5-5 tie in the intra-squad game versus the Red squad. Orr will remain with Team Canada and continue treatments with Physiotherapist Karl Elieff, but his hopes of suiting up against the Soviets appear to be over. If nothing else, the intra-squad game proved the Canadians have a difficult time getting up for these games in preparation for the Moscow leg of the series. "We have to respect the Swedes," Assistant Coach John Ferguson warned of the upcoming two game exhibition set with the Swedish National Team.  Still trying to adapt to the wider ice surface, defenceman Gary Bergman stated, "With that extra width and those corners, you have to keep telling yourself not to do things you normally would do. You can't go into those corners after a guy because that's tailor-made for the Russians. They w
Post a Comment
Read more "Guys were completely lost out there. They couldn't make up their minds where they should be positioning themselves." exclaimed Assistant Coach, John Ferguson after the first team session on the large European-sized ice. Harry Sinden added, "The ice makes a big difference. It's gotta be a different game, a different game from home. Here you've got to make the puck do a lot of the work. The ice is suited for a good passing team. It will be difficult to adjust. Today everybody seemed to be saying to themselves, 'What the hell is going on.'"  Defenceman Bill White figured the team would be fine with the wider ice, "What you do on defence is play as close to your partner as usual, force the puck carrier to go outside, and then keep him there." Rod Gilbert also seems to have no problem with the wider surface,"All our guys are good puck handlers, it shouldn't be hard to adjust. But because the nets are closer to the blueline we have
Post a Comment
Read more 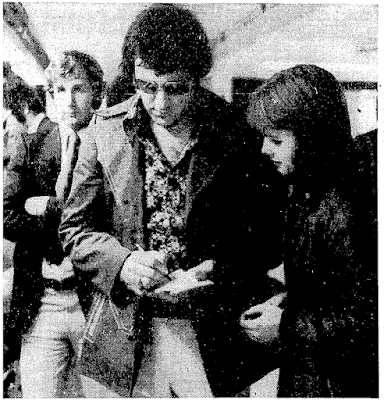 Espo arriving in Stockholm "We're determined to regain some of the prestige we've lost and to gain the edge in this series," stated Team Canada coach Harry Sinden upon arriving in Stockholm to prepare for the Russian leg of the Summit Series. He continued, "I'd like to see us play the way we can play. The big adjustment we must make is in conditioning. That was the biggest shortcoming we had. We expect Orr to start light scrimmaging with the team starting tomorrow, there's an outside chance he may start here." Alan Eagleson commented,"The Russians are good hockey players. This is as good a hockey unit as I've ever seen. I have never seen anyone, other than Orr, as fast as Valery Kharlamov. He's the only guy I'd mention in the same breath as Orr. If he's consistent as I saw, the sky's the limit on an NHL  contract - I'd say $1-million for a five-year contract." Maple Leafs coach, John McLellan, who scouted the Soviets
Post a Comment
Read more 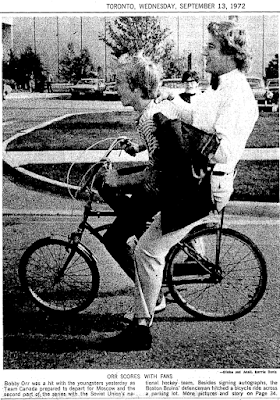 Bobby Orr arriving via bicycle  "I like the thought of bigger ice. It suits me, as long as we don't go chasing all over after them and tire ourselves out." said Ron Ellis of the European sized ice that Team Canada will encounter in Moscow. He added, "We'll have a week to work in Sweden to get in better shape and work together." Team Canada left from Toronto on the evening of September 12 en route to Stockholm, Sweden. They travelled on two separate aircraft, one via Jumbo Jet through Paris first, the other an hour later, a DC-8 via Frankfurt. The team plans to train in Sweden and play two exhibition games against the Swedish national squad while getting used to the larger ice surface (100 feet wide instead of 85 feet in the NHL). Coach Sinden agreed with the words of Ron Ellis that the larger surface may benefit some of his players, "Ellis, of course, and Cournoyer, Henderson, Perreault certainly and Frank Mahovlich too." Sinden went on to  heap ra
Post a Comment
Read more

50 Years Ago in the World Hockey Association, Mid-August 1972 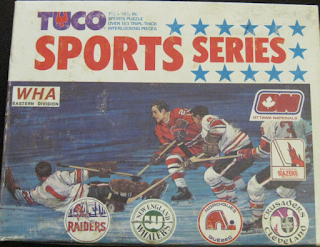 WHA Competition Raises NHL Salaries "The average salary increase in the NHL in the 1971/72 season was 15 percent. But because of competition from the WHA, the average increase in the NHL for the 1972/73 season may reach 35 percent. "Alan Eagleson Executive Director NHLPA, Aug. 17, 1972 Globe and Mail He continued, "The players who played for $15,000 last season have negotiated 100 percent increases." He guessed that the WHA has cost the NHL "about $5-million additional salaries." The average NHL payroll in the NHL last season, he again guessed, was $620,000. "Next season I believe payrolls per club will be up to $900,000 or $1-million." Smythe Says No to Hull  "I don't think contract breakers should represent Canada." Conn Smythe, Aug. 16, 1972 Globe and Mail. Smythe is referring to Bobby Hull who recently jumped to the WHA from the NHL's Chicago Black Hawks. "As for Hull being the greatest left-winger in the game, not many
Post a Comment
Read more 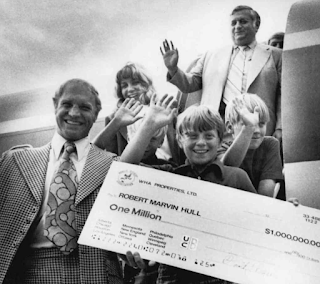 Fifty years ago this month, the upstart World Hockey Association was finalizing plans to go up against he long-established National Hockey League. What follows are a few news-making items from August of 1972. Clarence Campbell, WHA Won't Last a Year. "This is an economic battle, and we are being wounded very seriously." Clarence Campbell, Aug. 14, 1972, Globe and Mail. Despite the fact that Campbell believes the WHA-NHL bidding feud could have been far worse. "In fact, I'm glad that they are starting their operation this season. Another year of talking before they got rolling would have been more expensive. And if this is an economic confrontation, the surest way for them to fail is to get started. My personal opinion is that the WHA won't last a year."Campbell figured that the addition of Nick Miletti's Cleveland (Crusaders) franchise was a major plus for th e new league. Miletti turned to the WHA after his application for an NHL franchise was turne
Post a Comment
Read more
More posts