Showing posts from November, 2018
Show all 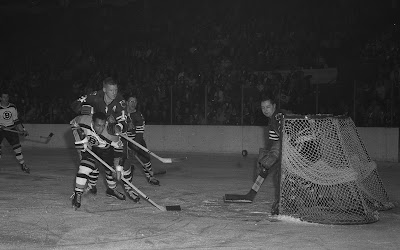 With today being the day Willie O'Ree is inducted into the Builders wing of the Hockey Hall of Fame, it's a good time to share a couple rare photos of the trailblazing player. These are from the collection of our friends at Vintage Sports Images . The first photo shows O'Ree with the Boston Bruins in what has to be the 1960/61 campaign as bespectacled Al Arbour is with Chicago. O'Ree had played two games with Boston in 57/58, but this was his only full season (mostly) in the NHL, playing 43 games and tallying 14 points. Behind O'Ree is big Bill Hay and of course in net is Mr. Goalie, Glenn Hall. This next photo shows O'Ree later in his playing career with the San Diego Gulls of the Western Hockey League. Willie starred for for the Gulls from 1967/68 to 1973/74. To narrow down the timeframe on this photo we look at the other players in the picture. Using the SIHR photo database it is determined that the Gull on the left side is Bruce Carmichael who was a Wester…
Post a Comment
Read more
More posts