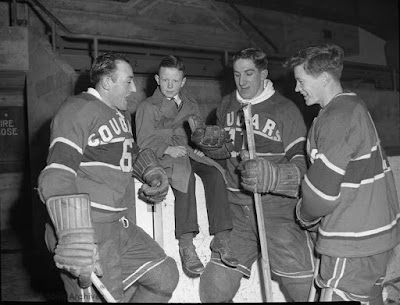 Here's another great old hockey photo, this one found in the online Victoria, BC Archives. It's simply titled "Victoria Cougars players with boy in trench coat, 1952". Looking at the Society for International Hockey Research player photo database, it's fairly easy to determine the three players in the photo. From Left to Right; Bernie Strongman, Eddie Mazur, James Fodey. 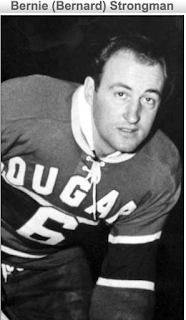 Winnipeg native, Bernie Strongman played for Victoria from 1949 through 1953 when he retired. He had helped the Cougars win the Lester Patrick Cup as champions of the Pacific Coast Hockey League. According to the Society for International Hockey Research database, Strongman is alive to this day, having turned 99 years old in June. 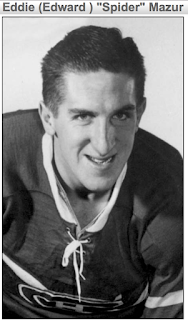 Eddie Mazur played two full seasons with Victoria before being called up by the Montreal Canadiens for the 1951 Stanley Cup playoffs. After potting 43 goals for the Cougars, Mazur got into two matches for the Habs that spring, the year they lost to Bill Barilko's Maple Leafs. After helping Montreal win the 1953 Stanley Cup (scoring 4 points in 7 playoff games), Mazur would play a full season with the Canadiens in 1953/54, tallying 21 points over 67 games. 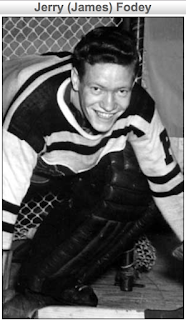 On the right we have goaltender Jerry Fodey, and his very presence helps nail down the date of this photo. Although the file of the photo says 1952, Jerry Fodey played but one season for Victoria, 1949/50. Strongman and Mazur both played that season as well, so the photo must be form the 49/50 campaign. That year the Cougars finished sixth and a distant last place in the PCHL's North Division, Fodey playing all but one of the 70 games while posting a somewhat respectable 4.29 GAA.
The Victoria Cougars name, which had originated in 1922 with the Patrick brothers in the Pacific Coast Hockey Association and transferred to the Detroit Cougars in 1926 (and eventually the Red Wings) would last in the Western League until 1961. The name was re-incarnated in the BCJHL in 1967, the major junior WCHL/WHL in 1971 and finally the Vancouver Island Junior Hockey League Junior B circuit from 2002 to present. 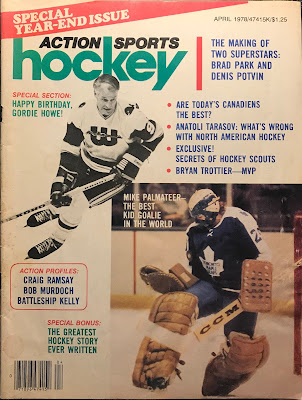 These two covers pretty much bookend the career of Maple Leafs goaltender Mike Palmateer. The first one is from Action Sports Hockey, April 1978 and The Popcorn Kid shares the cover with Mr. Hockey. The article on Palmateer declares him "The Best Young Goalie In The World" and shows him making one of his characteristic, unorthadox saves. The title of the article was a bit of a misleading though. Sure, Palmateer was 24 years old and finishing up his second NHL season, but there really just weren't that many young goalies in the NHL at that time. The only other one who could be argued for this title would have been 22 year old Don Edwards of the Sabres. Amongst the 24 goalies who played at least 30 games in 1977/78, the only ones under 25 years of age were Palmateer, Edwards, the Rangers John Davidson and Jim Bedard of the Capitals. Palmateer finished the season third in the NHL with 34 Wins, 4th in Save Pct and 2nd in Shutouts. The next season he would finish 5th in Hart…
Read more 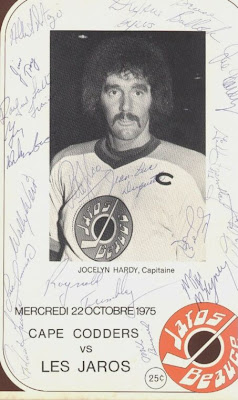 Most people know that Wayne Gretzky is the only player in NHL history to score 200 points in one season, doing it on four different occasions in the 1980's. Mario Lemieux came close with 199, but that's it. Who though, were hockey's first ever and most recent 200 point men?

In 1975/76 in the minor level North American Hockey League (which was the main minor league of the WHA), Jocelyn (Joe) Hardy scored an impressive 208 points for the Beauce Jaros out of St.Georges, Quebec. Hardy was a player-coach for the first place Jaros and the first ever professional hockey player to break the 200 point plateau. His 60 goals and 148 assists in 72 games was 48 points better than the second place scorer in the league, teammate Richard Grenier.

Hardy had played 40 games with the NHLs California Golden Seals in 1970/71 notching 14 points. After a year in the AHL he scored 50 points in 72 games for the Cleveland Crusaders of the WHA and 59 points in 77 games for the Chicago Cougars. He wou…
Read more

The King of EBUGs, Norm Beaudin 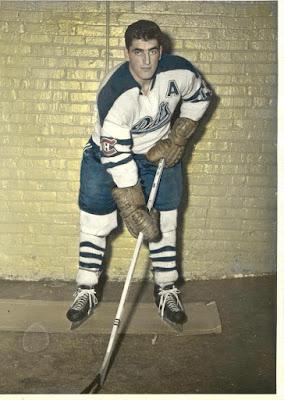 The Maple Leafs were beaten by an EBUG (Emergency Back-Up Goalie). David Ayres, part-time practice goalie of the Leafs and Zamboni driver of the AHL Marlies, stopped 6 of 8 shots over half a game. He earned his first (and surely only) NHL victory and even recorded a shot on net with a long clearing pass that hit the net. As inspiring and impressive as Ayres story is, he's got nothing on longtime pro, Norm Beaudin.  That's right. Beaudin surely has to be the only ever Emergency Goalie to score a goal in the same game. The Hull-Ottawa Canadiens were the Eastern Professional League affiliate of the Montreal Canadiens and were loaded with future NHLers. Beaudin, in his rookie pro season after leading the junior Regina Pats with 57 goals the previous season, was joined by the likes of Red Berenson, Terry Harper, Jacques Laperriere, Claude Larose, Jimmy Roberts, Cesare Maniago and Ernie Wakely.  It was Wakely's injury that prompted Coach Scotty Bowman to ask his bench if anyone…
Read more